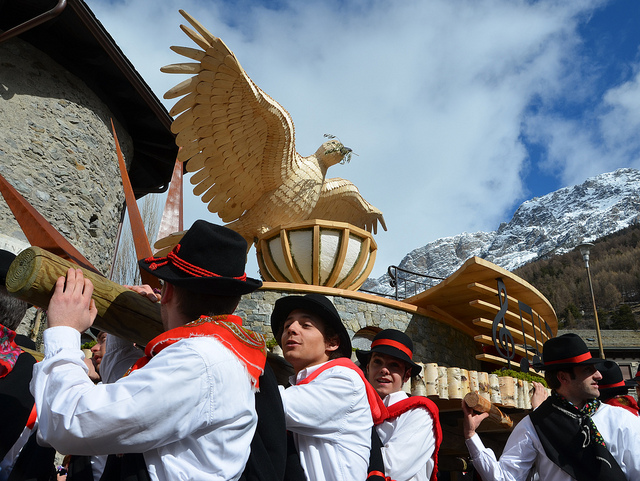 In the whole Catholic world the popular tradition of the Holy Week is full of rituals and theatrical re-enactments of the Passion of the Christ, who often root in the early centuries of Christianity. Lombardy is no exception.

In the afternoon of Good Friday, the ostension of the Sacred Vases takes place in the Basilica of St. Andrew, in Mantua. It is said that the Sacred Vases contain terrain soaked with the blood of Christ, carried here by Longin, the centurion who pierced Christ’s chest with a spear and then converted.

Another ancient tradition has taken place in Vertova, near Bergamo, since 1580. The wooden sculpture of Christ is removed from the cross by 4 guards dressed up in costume and then carried in procession. On the same day, at night, in Limone sul Garda, Brescia, the procession winds through the streets of the old town, lit up by hundreds of ‘lumàs‘, empty shells of snails filled with oil.

Old traditions are still vivid in many other corners of Lombardy too. In Germignaga, in the province of Varese, the night parade ‘dell’Intero‘, characterized by groups of  figurants, have been taking place since 1705.  On Good Friday the night procession of ‘Crocione‘ is carried out also in Tromello, in the Lomellina area, animated by characters that pass down particular roles from one generation to another.

In Stagno Lombardo, Cremona, a full-size dead Christ  is brought along the town streets decorated with candles and flowers. In Melegnano, Milan, the Fair of Forgiveness, dating back to 1542, is always full of people.

The rites of Holy Saturday, rich in symbols, refer to very remote traditions too. In Lombardy’s rural tradition, people used to bring home the fire-brands that had been blessed on the church yard to revive the fire of the chimneys in the rooms where they bred silkworms. The coals were also placed in the children’s bed to warm them. The holy water was kept at home so that everyone could bathe his/her eyes to protect them. Holy Saturday was a day of great preparations. The housewives were busy cooking the Easter lunch.

Among all the celebrations that take place in Lombardy on Easter Day, the most peculiar is the parade of the floats called ‘Pasquali‘ (i.e. of Easter) in Bormio, Sondrio. The Pasquali are floats that are prepared throughout the winter with handmade creations and allegories of Easter. On the Sunday of Resurrection the floats parade through the streets of the village carried on the shoulders by the people in traditional shepherd-costumes. According to this tradition, in this form since 1932, each of the 5 department of the village has to take a lamb, to be blessed as propitiatory gift, to the church of its neighborhood.

In Lombardy, as well as in all Italian regions, Easter is not made up exclusively of religious rites, there is a whole gastronomic tradition of sweets which is part of the Italian cultural and historical heritage.

Colomba, one of the most renown Italian Easter cakes, was born right in Lombardy in the ’30s by Motta and then became widespread throughout Italy.

In Mantua an Easter popular cake is Bussolano, a donut made with simple ingredients, like flour, eggs, sugar, butter and flavored with a bit of Marsala wine.

In the Pavia area the most famous is Pesce d’Aprile (i.e. April’s Fish), a sponge cake shaped like a fish, made with apricot jam, almonds, candied citrus peel, rum and almond paste, about a meter long and weighing 15 kilos.

Resta, also called Resca, is the traditional cake made on Palm Sunday in the area of Como. Very leavened, with a peculiar shape and an olive stick in the middle, once was only prepared on the occasion of Palm Sunday, nowadays is produced throughout the year.

Turta dei paisan (i.e. Cake of the countryman) is typical of Brianza, the areas between the province of Milan, Monza and Lecco. It’s a cake of humble origins, made with stale bread, milk, amaretti, pine nuts, raisins, sugar and cocoa. During Easter time is produced in the form of a bell.