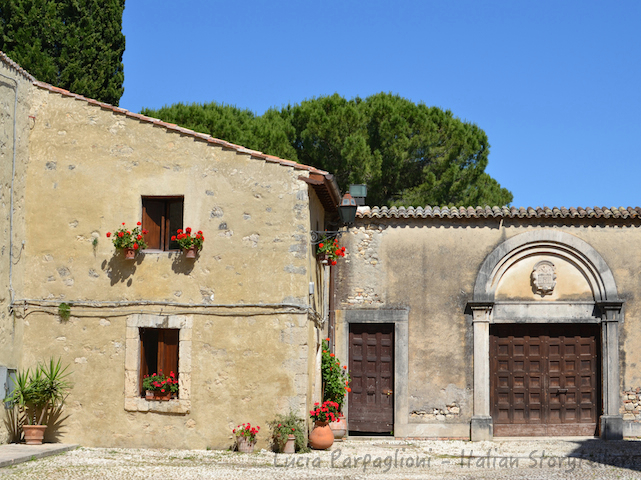 A place speaking of glory and history.

Perched on a hillside, preceded by a pretty hamlet, the Abbey of Farfa still retains the charm of what was – in a certain period of the Middle Ages – perhaps the most powerful feudal abbey of the Peninsula.

The Abbey is located halfway up a green valley full of olive trees, in Sabina, an area in the north-eastern part of Lazio which hosted, in the remote past, shrines of pagan worship. A place that has always been dedicated to spirituality and not casually in the near territory is located the Holy Valley of Rieti, home of Sanctuaries and of a Franciscan Monastery. Outside the abbey there is a pretty village of late medieval origin with artisan shops full of local products (such as oil and cheese).

In 680 the Savoy priest Thomas de Maurienne, a pilgrim returned from Jerusalem, founded a benedictine monastery, and it was then that this outpost on the border between the Duchy of Spoleto and the Roman territory attracted the attention of those who had an interest in controlling the territory of the Church.

The Abbey of Farfa was in the Middle Ages the dominion center of a vast territory that stretched from the Tyrrhenian to the Adriatic, from the Sabine area to Umbria and Marche. Its power originated from a privilege granted by Charlemagne and was then strengthened by the support given by successive emperors. It therefore could count on a great independence from the papacy.

Since the beginning of the year 1000 this Abbey was one of the great centers of learning and of culture of the entire West, a melting pot where Germanic culture could meet the Roman-Christian one. Also great was the commercial importance of this place, in fact, in Farfa was held one of the largest fair of the Middle Ages. The independence and splendor ended with Worms’ Concordat, when it was brought under the dominion of the Roman Church, who confiscated the wealth and reduced its relevance thus forcing it on depending on neighboring dioceses and commendatory abbots.

The subsequent history, of highs and lows, led the Abbey into a state of neglect. After the unification, with the transition to the Italian State, the complex was largely sold to private individuals. In 1921 abbot Schuster (later Cardinal) operated the definitive revival of the Abbey repopulating it with a large colony of industrious monks.

Today the Abbey has not the notes of grandeur that some other Abbey with a history of lower magnitude can show. It looks in appearance almost like a medieval fortress. The complex consists of a continuous fence that encloses the great buildings of the Abbey Church, Santa Maria di Farfa.

Through a Romanesque doorway one can access to the courtyard where the present Abbey Church, which is recognizable in the old Carolingian structure, stands. A magnificent Romanesque bell tower with its 3 mullioned windows flanks the Church and in the Cloister can be observed architectural fragments dating back to the various phases of Abbey’s construction. In addition to the pillars of the Church, on the walls of the complex, there are several Roman and high medieval remains, including the remains of sarcophagi.

There is a nice curiosity on the Abbey: here, in 1639, was represented the first musical comedy, entitled ‘Let those who suffers hope, or the Farfa’s Fair’, written by Monsignor Giulio Rospigliosi (Pope Clement IX) and starring, in the role of actor and musician, Salvator Rosa.

A place where every wall and every stone speaks of glory and history. A place where you walk around with a smile, enjoying the peace of the characteristic cobblestone streets, the local oil or trying the famous Monks’ herbal products. One of those places that make you remember about itself.