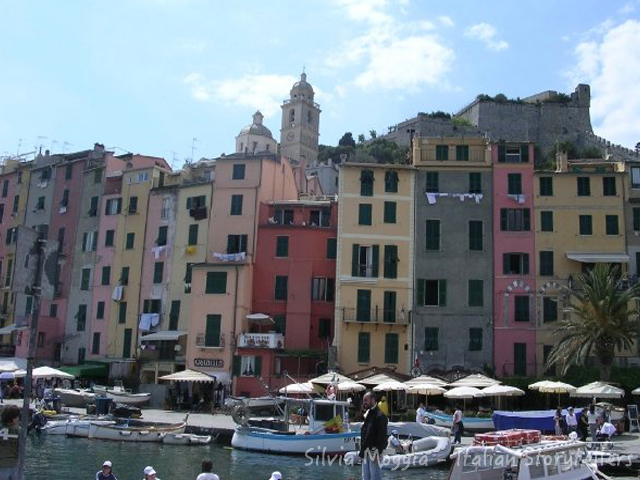 Few hours in Porto Venere, one of my favorite places ever.

Situated in the western part of La Spezia, Gulf of the Poets is a tiny peninsula surrounded by 3 tinier ex military islands: Tino, Tinetto and Palmaria.

The origins of Porto Venere date back to the 150 AD under the Roman Empire. It developed from a small fisherman village into a very important naval base for the Byzantine fleet first and then for the Republic of Genoa, resisting to several Normans and pirates’s attacks. While walking along its huge defense wall or admiring the horizon from the rocks, you can actually feel and imagine its glorious past.

Its beauty was well known already in the 19th century and many important poets visited it and settled down here for quite long periods. Among them Lord Byron, whose name was given to an amazing sea cave now collapsed Grotta dell’Arpaia, George Sand and Alfred de Musset, whose love affair was stormy like the winter they spent there.

Strolling around Porto Venere is a true pleasure.

The great beauty of its sea front promenade and the harbor, the mazy tiny and colorful alleys where the smell of the local focaccia (i.e. typical salty baked bun) never disappoints, its small marine style shops, the seafood restaurants a few steps from the Mediterranean Sea, the typical fishing boats filling the piers and the relaxed atmosphere… the perfect place to honor the Italian dolce far niente 😉

Its churches and military buildings also deserve a visit. The impressive fortress of the Doria Castle built by the Genovese Republic on a rocky outcrop, the stony gate of the ancient town and the tower, as well as Saint Peter, the scenographic gothic church dominating the promontory and supposedly built on an ancient pagan temple and the romanic Church of San Lorenzo, shrine of Our White Lady, patron of the town. The feast of Our White Lady is celebrated every year on August 17th and on that night the village is illuminated by thousands of candles and torches and their smell and red-orange light contribute to unforgettable magic moments.

If you plan a visit to this area (and I sincerely suggest that you do), don’t forget to arrange a boat tour of the 3 islands and visit the Saint Venerio Abbey on Tino, now a small archeological museum, the lighthouse also named from Saint Venerio, fort Umberto I on Palmaria, a marine cultural center and the Scola Tower. Palmaria also offers great hiking paths with breathtaking views!

Not to be missed are also the other towns of the Gulf of the Poets: San Terenzo, Tellaro, Monte Marcello and Lerici. Beautiful seaside fisherman villages who have charmed and hosted writers such as D. H. Lawrence, D’Annunzio, Marinetti, Soldati, Italian journalist Indro Montanelli, not to forget Percy B. Shelley, who drowned in a storm on board of his schooner ‘Ariel’.

By car –  If you come from the west, you can drive along the spectacular scenic route dominating the Cinque Terre, known as Panoramica, or take the exit of La Spezia on highway A12 Genova/Livorno or A15 La Spezia/Parma, then follow to Porto Venere (15 km) or Lerici, San Terenzo and Tellaro (6 km).

By train – Connections from Genova, Parma and Pisa till La Spezia Centrale, then bus A.T.C. line.

Tradition says that Porto Venere, in latin Portus Veneris, owes its name to a Venus temple situated where now stands Saint Peter church ‘cause the goddess was born from the sea foam below the promontory and you can actually admire the Gulf of Poets, formerly Gulf of Venus, in the world famous Sandro Botticelli’s painting ‘The Birth of Venus‘, but also on Turner’s paintings.