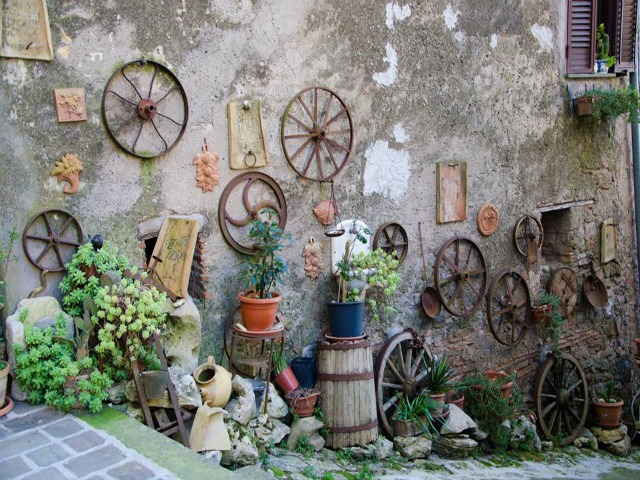 Art and culture mixed with vineyards, olive orchards and crops.

The city was originally founded by Umbrians in 1134 B.C., about 400 years before Rome; its current urban structure, surrounded by the legendary polygonal walls which enclosed the settlement with defensive purpose, was built between the 8th and the 3rd centuries and it’s a grandiose proof of the ancient origins of Amelia.

The town became a Roman Municipium in 90 B.C. and, in order to adapt it to its new role, an urban reorganization was started: Amelia was provided of a water supply system, a Forum and a new road network; furthermore, thanks to its strategic defensive position – also favored by the river connection with Rome – it was a booming commercial center.

Amelia conserves a huge number of evidences of the Roman influence: numerous findings, dug necropolis and villas, antique mosaic floor hidden in the undergrounds of ancient palaces and much more; the ancient materials found in the town and in its environs has been reorganized and collected in the Civic Archeological Museum.

The collection retraces 13 centuries, providing a chronologically complete overview of Amelia’s history: the itinerary articulates in 3 floors, from the Umbrian origins to the Middle Age, but the most important attraction is the magnificent bronze statue of Germanicus, the only one with those big proportions!

It represents an armed Roman general wearing a richly decorated cuirass: it’s Germanicus, a prince of the Julius-Claudia family born during the Emperor Augustus and protagonist of a great political and military career that brought him big honors and rewards, as many statues erected in Italy and in the Provinces.

That of Amelia confirms the prestige he conquered during his carreer, in fact he is depicted as a victorious general and he represented a new Alexander for his military bravery, his age and personality.

The Museum is situated in the cloister or a former convent and, a few steps away, there’s the Church of San Francesco: it was first built in 1287 in Romanic-gothic style and during the 15th century a cloister and a convent were added.

While Roman traces of Amelia’s history can be found everywhere in the town and its countryside, the old town centre conserves a predominant medieval aspect; the widespread recycling of Roman elements turns the streets into a vast open-air museum. The main and the most important gate to the centre is Porta Romana, completely restructured between the end of the 16th and the beginning of the 17th century.

During the 16th and the 17th century Amelia was an significant centre of the Roman late-Mannerist irradiation, visible in many churches and elegant noble palaces that dotted ancient narrow alleys and little, charming squares.

Palazzo Boccarini was the adobe of one of the most important noble families of Amelia, who lived here since the 12th century; it shows a mixture of styles ranging from 1300s to 1600s and the second floor of the palace house the Amerino Salon, decorated with gorgeous frescoes representing history and myth scenes about the town, painted by Livio Agresti, a mannerist painter of the late 16th century.

Palazzo Cansacchi was built between the 15th and the 16th century on the ruins of a roman foundation, the most fascinating corner you can admire there is the small courtyard of the 14th century with a columned loggia and an octagonal well. Inside the palace there are sumptuous paintings by Federico Zuccari and Pomarancio, two important exponents of the late 16th century Italian art.

Palazzo Petrignani dates back to the 16th century and it’s one of the main example of the manieristic current in Amelia; the Zodiac Salon is a sumptuous fresco representing, in the middle of the ceiling, the encounter of Attila and Pope Leone IV, surrounded by allegories of the four seasons, the maps of some Italian cities and, obviously, the signs of the zodiac.

Palazzo Farrattini is the smaller brother of Palazzo Farnese in Rome; it was designed by Antonio da Sangallo the Younger, one of the main architects of the Renaissance, and built between 1520 and 1525. The palace is characterized by a geometric façade with bugnato marble-rock-decorated portal, the cellars of the buildings house the remains of a Roman pavement with mosaics and inside you can admire a series of luxurious rooms, among which the Salone del Sangallo, finely decorated.

Palazzo Venturelli was built on the site of Roman structures, it belonged to a family well known in Amelia since the 14th century; it was built in the 16th century by reusing ancient materials and its cellars conserve the floor of a Roman Domus, decorated with a black and white mosaic representing geometric and floral decorations of the 2nd century A.D.

Three staircases lead to the piano nobile of the palace, where there is a rectangular hall with a beautiful ceiling decorated with allegoric scenes and landscape paintings of the town, contained inside a sequence of frames held up by telamons. The floor, instead, is adorned with the emblems of the family.

Going up into this tangled and surprising labyrinth of narrow streets you can reach Piazza Matteotti, where the Roman Forum was situated in the ancient times; nowadays, the current square is the access to the Roman Cisterns, an extraordinary hydraulic engineering work built when Amelia became a Roman municipium.

This complex system was composed by 10 adjacent openings with a capacity of 4400 cubic meters of water and was used to collect and purify it for the water supply of the upper part of the town.

Then, on the top of the town hill, there is the most important religious building of Amelia: the Basilica of Santa Fermina, built in the 9th century and enriched with paintings by some important artists such as Taddeo Zuccari and Pomarancio, and the baptismal font by Donatello situated inside a chapel of the 15th century, where you can also admire two historical pipe organs built in the 17th century, one of which with a rare wing positif structure.

Finally, let’s have a look at the Civic Tower situated beside the Cathedral: it’s a twelve-sided building built in 1050 with recovered Roman elements and symbol of Municipal Independence.

All this, and much more, is waiting for you in Amelia: let’s discover more here!