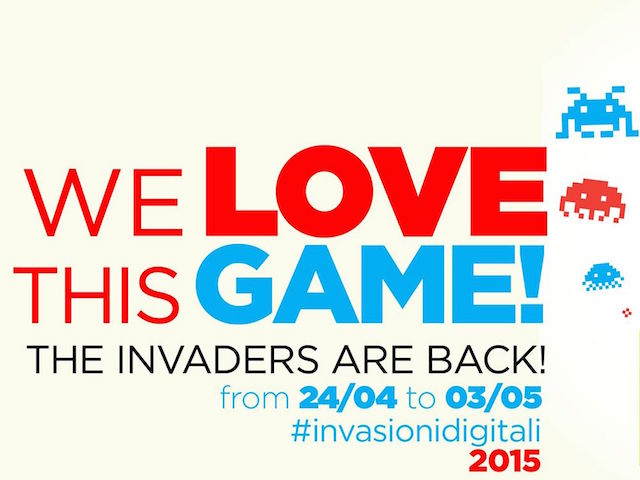 Invaders are back, but they come in peace

When I founded Italian Storytellers, I tought I had a kind of mission to accomplish: let foreigners discover the real Italy made of little things. It is undeniable that we have masterpieces of all time in our territory, but many of you think that we just have those ones.

Italy is like a treasure chest full of gold coins and every coin has the same importance of the others, because it has contributed to let our history become glorious. Unfortunately we are not able to give to these gold coins the wide appeal they would deserve and that is the reason why tourists travelling to Italy don’t know what we are concealing to them.

Not all Italian people just look at this situation and twiddle their thumbs. Someone sets to change the situation. This is what Fabrizio Todisco and Marianna Marcucci do with ‘Invasioni digitali‘ (i.e. Digital Invasions).

What are the Digital Invasions?

‘Digital Invasions’ is an Italian non-profit association that wants to support museums and cultural heritage by peacefully invading them telling the experience on blogs and social media. The association aims to co-create and nurture cultural value through the participation of visitors, who communicate their experience. The very first edition of ‘Invasioni digitali‘ was held in 2013.

Anyone is interested in it can be an invader in 2 ways:

The approach is bottom-up and people can organize invasions independently during a given time frame. Invaders can be of all sorts: bloggers, archeologists, photographers, historians, instagrammers and so on. Their different backgrounds let it possible to communicate the many different aspects of the location they are invading.

As I told you before, Italian people don’t know very often what they have around themselves. They don’t care about it. Maybe it also due to the management of museums and cultural sites, that try to keep away people instead of attracting them.Generally these sites are managed by public governement, but they are run by eager people who spend their time working on spreading why the site is so important. During ‘Invasioni digitali‘ visitors transform themselves into content creators and the cultural sites can be widespread on social media.

The association believes ‘that art becomes knowledge when it’s shared’.

What will go on between 24th April and 3rd May?

The association Invasioni digitali is sustained by people, called ‘ambassadors’. Some of the Italian Storytellers staff are ID ambassadors:

You will be spoilt for choice about which invasion to take part into. From North to South, from West to East you can discover our country by visiting those little places which have not the power (and the money) to become more famous worldwide. You can discover Mantova and Sabbioneta,

From 24th April to 3rd May we will help Invasioni digitali to share the content of the numberous invasions organized in that period throughout Italy as one of the media partners of the event. I remember you our social profiles: Facebook, Instagram, Google+ and Twitter.